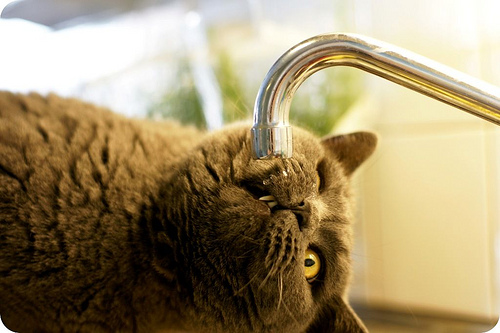 Australia has the distinction of being the driest inhabited continent on earth, yet the OECD ranks it fourth in per capita consumption of water.

Although ground water is an important source for many remote communities, the overwhelming majority of Australians rely on water stored in reservoirs. Authorities monitor the quality of water from these sources, and take steps to purify it, which often include additives such as chlorine and other disinfectants. These impair its taste, but more seriously may also react with otherwise harmless organic substances to produce trihalomethanes, which can, over time, be harmful. And while Australian water is largely free of impurities that cause immediate health problems, much Australian water in rural areas is at risk of tainting with agricultural chemicals, and these often go undetected for some time. In short, few Australians are at serious risk from their public water supply, but many receive unpalatable water that doesn’t contain optimum quantities of trace elements.

Even water which is perfectly safe to drink can be “hard”, carrying dissolved bicarbonates that stop soap working properly, and can be deposited in kettles and water heaters. Adelaide’s water is uniformly hard. Perth’s water supply, on the other hand, varies greatly in hardness, with some districts receiving water significantly harder than Adelaide’s. Researchers have found very little convincing evidence of adverse health consequences of drinking hard water, but perhaps the strongest correlation is with elevated incidence of eczema in children.

Because their drinking water is so often unpalatable, Australians have become great consumers of bottled drinking water, spending over half a billion dollars a year on it. But bottling drinking water is a notoriously wasteful means of delivering it. The costs of production are far higher than the public supply, and only a third of used bottles end up being recycled.

Growing awareness of this wastefulness has turned Australians in increasing numbers to purifying the water supplied to their homes, and a wide variety of domestic systems is available. These include “whole house” systems which as well as making the water safe and palatable, soften it as well, but also sink-mounted drinking water dispensers, which have the advantage that they can chill, and even carbonate the water at the point of delivery.

These systems principally use two processes:

Filtration – modern filtration provides a very high level of purity, and can be configured to remove harmful contaminants, while leaving beneficial trace elements in the water. Sink-top and under-sink variants are available, and can include chilling, sparkling and even boiling. Filtration does not involve water loss.

Reverse-osmosis – this is a less energy-efficient process, and some water is lost in the process. However it does provide the highest levels of protection. It’s suitable for areas where safety of the public water supply is in doubt, and for applications like boats, where the supply of untreated water is effectively unlimited.

These principles have been used to create a whole range of in-line purification appliances, and at Water2Water we can supply a system suitable for any of the varied water conditions found in Western Australia. These range from tap-mounted filters which can supply water chilled, boiling or at ambient temperature, through a variety of above- and under-sink units to large capacity, “whole-house” purification systems. We also cover industrial uses, as well as caravans and boats.